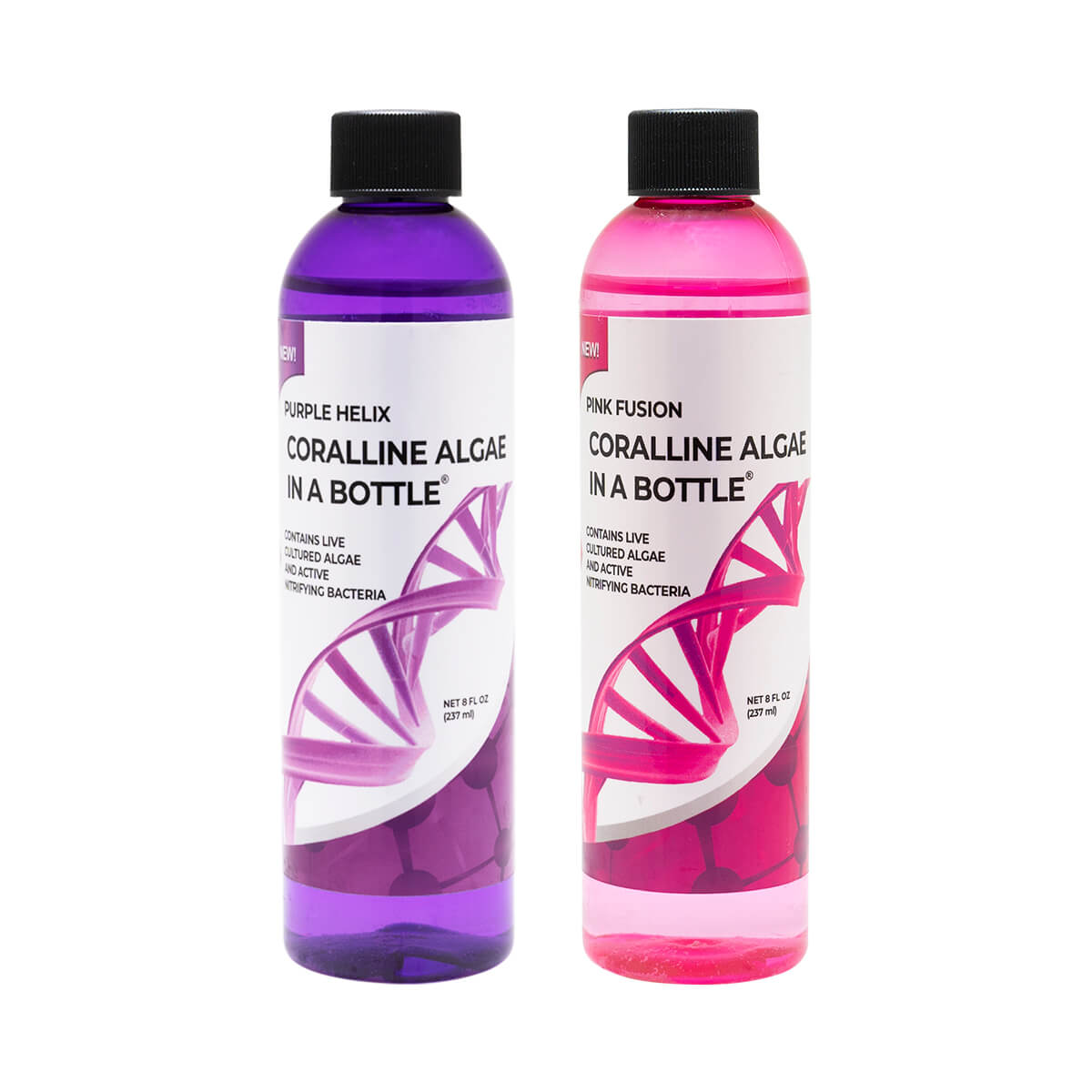 Unlike hair algae or film algae, coralline algae is something most hobbyists want in their aquarium. This is mostly because of the looks of the algae. Plain white rocks often look boring or even ugly, but coralline algae can change that. This algae grows in circular spots over rocks or glass. The algae is usually either purple or pink and quite colorful. If you have a fish only system, this is the best way to make your live rock less boring. Unless you have rocks completely covered in coral, coralline algae will also help those with reef tanks by filling in the gaps between corals. Unlike nuisance algae, coralline algae will not (usually) bother corals. It is an outstanding way to bring more life to your aquarium without much trouble.
The other thing that makes coralline algae beneficial is that it will help keep nuisance algae away. Coralline algae will compete with pest algae for nutrients and space. If you have a lot of coralline algae in your aquarium, it will be difficult for other types of algae to establish themselves. This is possibly the biggest reason to introduce coralline algae. Nuisance algae can become very difficult to remove, so if you can do just one more thing to help prevent it, you should.
Let's talk about the care requirements of this algae. Unlike pest algae, coralline algae has to be introduced into your aquarium. If you used live rock from another system, coralline algae might be present on it, but it depends on if the previous system had coralline algae in it or not. Coralline algae needs light to grow. If you are adding it to a reef tank, this should not be an issue. However, if it is going into a fish only system, you have to make sure that your light is strong enough to support it. Generally, most semi-decent lights will do, but it depends. Coralline algae is a little bit more demanding when it comes to parameters as well. Parameters that are more stable will render better results with faster growth. Coralline algae is not difficult to keep, but it will not rapidly grow the way pest algae grows.
While coralline algae is awesome, there are some things to be mindful of before you put some in your aquarium. First, is that coralline algae uses calcium to grow. This can be a problem for those with SPS systems or those struggling to keep their calcium up in the first place. Coralline algae will lower your calcium, alkalinity, and magnesium levels if it is not accounted for. Another thing to keep in mind is that coralline algae can sometimes become intrusive for corals. While this is rare, some hobbyists have reported this happening. This is not a known thing to happen, but the possibility is there. However, if you have already established corals, this certainly won't be a problem. Again, even if you only have small frags, this is usually not a problem. The final issue that may present itself is the coralline algae growing on the glass. There is no way to ensure that the algae only grows on the rocks. You may have to scrape the coralline algae off the glass from time to time, but it is not too difficult.
Are all of these possible issues worth it? Well, it depends on your aquarium. The main thing that becomes an issue is calcium consumption. However, if you are not worried about that, then it is generally worth it. If you have a SPS aquarium, you want to keep your calcium, alkainity, and magnesium as stable as possible, so adding coralline algae is propbably not the best thing to do. This should not be as much of a problem for other aquariums. If you have lots of LPS corals, calcium consumption is still something you have to worry about, just not as much. For those with soft coral systems or fish only systems, you generally don't have to worry about calcium.
Coralline algae will make your rocks and your aquarium as a whole more beautiful and more pleasant to look at!

What is the shelf life of the coralline algae?

Each bottle has a shelf life of two weeks and a best by date marked on the bottle.

How do I store the coralline algae?

Coralline algae should be kept at room temperature; it should not be refrigerated.

What steps should I follow when introducing the coralline algae to my system?

First you will want to turn off any filters, such as your sump pump, protein skimmer, and UV sterilizer if equipped. You will want to leave your powerheads on though, so as to help distribute the coralline algae.

Before introducing the coralline algae, shake the bottle vigorously, as some algae spores may have adhered to the inner walls of the bottle during shipping.

After shaking, pour the entire contents of the bottle into your saltwater aquarium. (If the bottle is cold, bring to room temperature).

Once you have emptied the contents of the bottle, refill the bottle about halfway with aquarium water before shaking and pouring again.  We recommend doing this several times so as to introduce as many coralline algae spores as possible.

After you have finished, leave all of your filtration equipment off for a minimum of two hours so as to let the coralline properly distribute and settle. 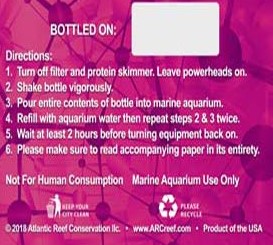 What are the best parameters to see growth?

How long does it usually take to see any results?

It takes approximately two months before you will start to see any visible signs of growth.  The first signs tend to be green coralline growth prior to any pink or purple, which may appear as small white or green dots in your system. 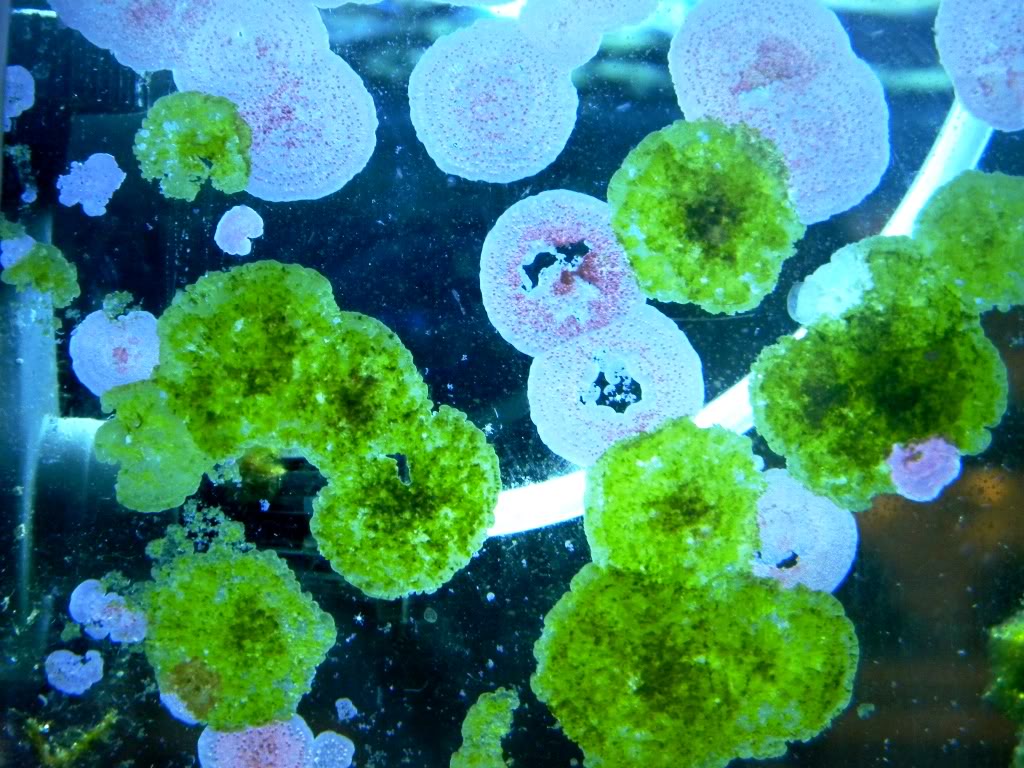