Peppermint shrimp are a brightly colored, inexpensive saltwater reef shrimp species that are often recommended to help control aiptasia anemone populations. But they are also a fun, interesting, easy-to-care for  invertebrate that can add some color and variety to your reef tank.

Let’s dive a bit deeper into what makes them interesting, how to care for them, what they are compatible with and whether or not you can add them to your reef tank safely.

A potential member of your clean-up-crew

One of the first and perhaps most straightforward interesting behaviors of the peppermint shrimp is that they serve as a somewhat less traditional member of the clean-up-crew. When I think about the traditional clean-up-crew members: hermit crabs, Cerith snails, and Nassarius snails may come to mind first.

But given the facts that they will spend their time crawling over your substrate all day picking through the detritus and algae filaments looking for a bite to eat–they are certainly an appropriate and eligible member of the clean-up-crew. 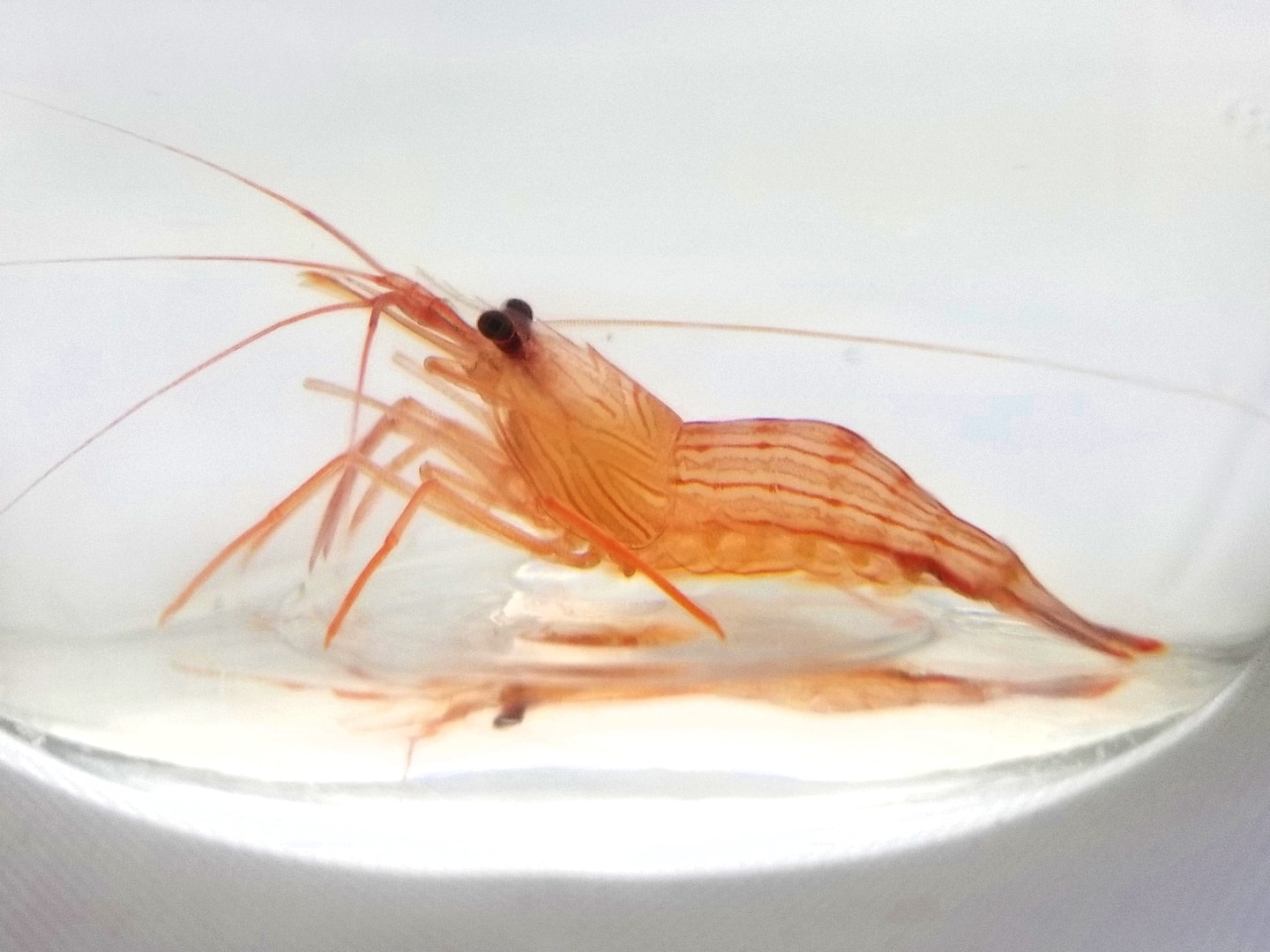 Peppermint Shrimp are pretty easy to place in a tank thanks to their small size. If you are just planning on keeping a single Peppermint Shrimp, then you will need a minimum tank size of ten gallons. If you plan to accommodate multiple Peppermint Shrimp, then it's recommended to add an extra five to ten gallons per shrimp. For the most part, adding them to a pre-existing tank won't be much of a problem since they won’t take up much room.
You should ensure that the Peppermint Shrimp can easily scavenge and have some small caves to hide inside of. They are particularly happy in tanks that include live rock for them to live in and scavenge on. They can work with pretty much any type of substrate and are happy with live rocks. Once they are placed inside of a peaceful tank, they are hardy and won’t cause you much trouble.
If you are raising small Peppermint Shrimp, then keep in mind that strong filtration can suck them up. This can be a problem in smaller tanks where the species is closer to the filter intake. You should also be careful if you are planning to add in multiple Peppermint Shrimp. Make sure they will have enough area to claim their own territory to keep them from fighting.

Where they spend their time in the tank

As mentioned a bit earlier, shrimp are food for a lot of marine predators. So it may not surprise you to know that when you first bring them home from the local fish store and introduce them to your tank–they may have some trust issues–and be a bit shy. They generally prefer the safety of the shadowy ledges of live rock over being out in the open, but they do venture out to eat and hang out.
Regardless, they are almost always ‘attached’ to some structure with open water swimming typically reserved for rapid escapes when spooked rather than as a means of primary locomotion.

Peppermint shrimp are also technically considered to be a cleaner shrimp, meaning that they will potentially climb over willing fish volunteers, picking off parasites and damaged or loose scales.

As mentioned earlier, one of the most common reasons peppermint shrimp are actively sought out and added to a reef tank is because they are natural predators of the dreaded aiptasia anemone.

If you haven’t heard of aiptasia before, they are an undesirable, rapidly reproducing hitchhiker that absolutely thrives in reef tanks. They grow so prolifically that they can spread to plague proportions; they are like ‘contagious weeds’ in your reef tank and are a pain to get rid of.

The good news here is that the peppermint shrimp loves to eat them. So if you add a few peppermint shrimp to the tank, they will seek out and dine on the problem. Which is a fascinating-to-watch, non-chemical way to keep the plague population under control.

Peppermint shrimp are small. Fully grown adults are generally only ~2 inches in size.

Peppermint Shrimp are a hardy species that can live up to two years.

The most important thing to keep in mind when planning to introduce Peppermint shrimp into your system is to make sure shrimp are not on the menu for any of your current or future inhabitants.  Most fish with mouths large enough to accommodate them into their digestive tracts, like the Marine betta, pufferfish, or triggerfish will happily gobble up a Peppermint Shrimp.

The best tanks to add a Peppermint shrimp to will have peaceful, herbivorous species or planktivores/omnivores who tend to think of shrimp as friends, not food.  A few examples of good tankmates for peppermint shrimp are coral beauty dwarf angelfish, Seale's cardinalfish, mandarin goby, or yellow tangs.
These attractive shrimp are peaceful and can also be kept with other shrimp, including other members of the same species.

They will spend some of their time hiding in the cryptic or shaded areas of the tank, under rock ledges, etc., but when they are out and about in the tank, they seem to always be grazing for tiny morsels along the sand, in the crevices of rocks, pretty much everywhere.

Unless your tank is particularly nutrient sparse, they will likely keep themselves well-fed. You may even find them excitedly grabbing a few pieces of food at mealtimes.