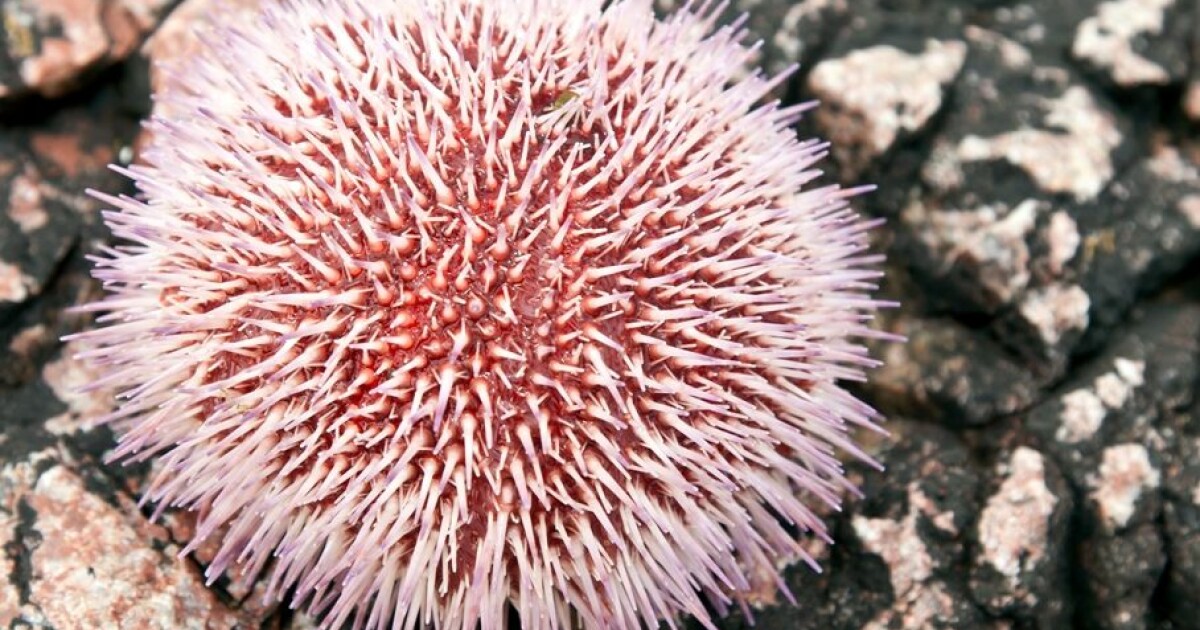 Sea urchins are considered by marine ecologists to be keystone species in tropical seas, as they promote the development of reef-building corals via the intense grazing pressure they exert on benthic algae. As such, they are an indispensable herbivore in any reef aquarium clean-up crew. Highly valued for its beautiful appearance as well as for its ability to eradicate filamentous algae, the urchin has long been a reef aquarium hobby favorite. Though less active during daylight hours, it emerges at night to feed on a wide variety of algae. Particularly in smaller tanks or where benthic algae growth is minimal, it will eventually require supplemental feedings in the form of dried algae or offerings of live material from the refugium.
AlgaeBarn sells two species of urchin. Both of these urchins are great algae eaters and look awesome, but one might be better for you than the other.
The Tuxedo Urchin is a fantastic invertebrate to have on your clean up crew. A group of them will decimate the algae in your aquarium. The advantage to the Tuxedo Urchin over the Pincushion Urchin is its small size. This urchin is far less likely to knock over frags or rock work. This urchin will generally be better for smaller tanks or tanks will lots of small coral frags.
The Pincushion Urchin is a larger urchin that is even better at eating algae than the Pincushion Urchin. Although this urchin can be more destructive than the other, it eats algae much faster. It also has an appetite for hair algae, which Tuxedo Urchins do not. The Pincushion Urchin is best for fish only aquariums (as long as there are no fish that will eat it), larger aquariums with lots of room and sturdy rocks, and aquariums with well-established coral colonies. If you have a hair algae problem, the Pincushion Urchin is one of the best ways to get rid of that issue.
Both of these Urchin species are completely reef safe. They will not eat corals. Again, the Pincushion Urchin can cause a coral frag to fall because of its large size, but it will not intentionally harm corals.
As for which of these urchins is more beautiful, that is up to you to decide. Most hobbyists generally agree that Tuxedo Urchins are more desirable when it comes to looks, but there is some appeal to the spiky style of the Pincushion as well. Tuxedo Urchins are cool because they come in two different colors: blue and red. Being able to pick a color adds a fun element to the Tuxedo Urchin.
Either way, both are fantastic urchins and fantastic invertebrates to have cleaning around your aquarium.

Care Requirements
It is not unlikely for your to find that your urchins have removed all of the algae from your aquarium. This is what they are supposed to do. However, at that point you will have to supplement the algae with nori or macroalgae from a refugium. Feeding them is not something that is at all hard to do and is well worth getting rid of ugly nuisance algae. Although the algae is most gone, small patch may pop up. The urchins will eat the algae as it comes back. Just keep in mind that if it looks like there is algae for them to eat, you will need to feed some macroalgae.
The Benefits of Captive Bred Urchins
Captive-bred invertebrates provide a huge advantage over wild-caught specimens. Because they are cultured under captive conditions, they are better adapted to living in an aquarium and tend to be more disease resistant. They are also better able to handle shipping/acclimation stress. By purchasing captive-bred sea urchins, you are supporting the aquaculture of marine organisms and helping to make our hobby sustainable! AlgaeBarn houses all urchins in an invertebrate-specific system to minimize the transfer of fish parasites and other unwanted hitchhikers. Frequently Asked Questions
HOW DO URCHINS BENEFIT MY TANK?+
Urchins are extremely effective consumers of nuisance algae and will help keep your tank spotless.
HOW DO I ACCLIMATE MY URCHINS UPON ARRIVAL?
We recommend drip acclimating the urchin directly in the jar.
WILL URCHINS REPRODUCE IN MY TANK?
Urchins have been documented spawning in marine aquariums, however, their young require specialized food and are difficult to raise in a marine aquarium.
HOW MANY URCHINS DO I NEED FOR MY TANK
We typically recommend 1 urchin per 20 gallons of tank volume. They are hard to overstock so long as sufficient food is available,  otherwise we recommend supplementing their diet with seaweed strips, pellets, or macroalgae!
HOW FREQUENTLY SHOULD I ADD URCHINS TO MY TANK?
Urchins have a long lifespan and typically do not need to be restocked.
MY URCHIN ARRIVED WITH DAMAGED SPINES AND IS INACTIVE, IS IT DEAD?
Although it may be shocking to find your urchin's spines have been damaged, this is a natural occurrence for them even in the wild and they will regrow back in time.  Urchins often take longer to properly acclimate to their environment than most livestock.  We like to ask that you observe your urchin for 24-48 hours after acclimation for signs of activity.